I don’t often cheer in theaters. So when I do, I take notice. Four movies in particular have had that effect on me in recent years, the last of which was the insanely wonderful Crazy Rich Asians. I laughed, I cried, and I went back the next week and saw it again. And you know what? I loved it just as much. But first, let me tell you about the other three.

I was sitting in a fold up chair in the Malibu Jewish Center where the Malibu Film Society was hosting a pre-release screening of Hidden Figures. No IMAX screen. No surround sound. No popcorn and Coke. Just an astounding story about remarkable women, not shown as a side note to the well-recorded achievements of men, but as the heroes in their own right. There they were, captivating our attention and inspiring us with struggle, contribution, and achievement. I gotta say, it made my heart sing. And when the credits finally rolled, I wasn’t the only person in the audience to stand up and cheer. We all did.

The second movie to jolt me out of my seat was Wonder Woman. Weren’t those Amazon warriors a marvel, leaping and slashing with such strength, vigor, and grace? And when little Diana watched her heroes train below then leaped off the turret to join them, well—I soared right along with her. No thought of pain or failure entered her mind. She didn’t even know about her godlike powers at that point in the story. She just leaped off that wall to go after her dream. In that moment, Diana was me. And with that connection, I became Wonder Woman.

I felt that same exhilaration when I saw the women of Wakanda shine in Black Panther. From the smart and spunky tech-genius sister to the fearsome Dora Milaje warriors, they were all so fabulous. Powerful. Spirited. And to have those attributes personified by women of color? Even better.

And then came Crazy Rich Asians. Crazy, right? I mean, Wonder Woman and Black Panther are both super hero movies, so that makes sense. And Hidden Figures is an untold story of American heroes. So what’s the big deal about an over-the-top romantic comedy? What could these films possibly have in common?

As it turns out, quite a bit.

All four movies feature strong, courageous women who think for themselves and act with conviction. Each has their own style, attitude, and expertise. Some of them aren’t even nice. Because you know what? Women don’t have to be nice! Women make awesome villains. And colleagues. And friends. And family. And heroes. Women are inspiring and courageous and confounding. So when I see movies that resonate with who I feel myself to be and celebrates how I strive to live, I cheer.

Hero movies—whether they star women, men, aliens, or talking animals—give us all a chance to fight those great fights, vanquish evil, and right injustice. They remind us of our inner warrior and inspired us to be the best people we can be.

So what about that romantic comedy?

As a woman of mixed ethnicity, I relate strongly to ethnic characters. The Hawaiian in me adored seeing my brown face reflected in those beautiful Wakanda women. I related to their tribal ceremonies and exotic otherness. And while they weren’t created from my heritage, they spoke to me loud and clear.

Those faces. Those personalities. Those relationships.
I knew them.

Those women, each so different and yet bonded by ancestral heritage, reminded me of my Chinese mother and her friends, some of whom were so closely knit they discovered they were cousins. First, third, eight times removed—it didn’t matter—they, we (I) were all connected. We knew those aunties, friends, and cousins. We had that mother, father, and Ah Ma. We were on the receiving end of those veiled comments, inscrutable looks, and fierce love too often hidden and cryptically conveyed.

Which is why it’s so important to have movies like Crazy Rich Asians, Hidden Figures, Black Panther, and even Wonder Woman—with its empowerment theme and women-centric culture—scoring big in the box office: It encourages film studios and financiers to take a risk. And it empowers writers (like me!) to tell stories rich in culture that celebrate differences and resonates deep in our core. Their success reaches out to an audience that might never have considered them.

Regardless of how different the notes,
commonality always strikes a chord. 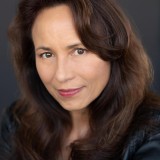 Tori Eldridge is a Honolulu-born mystery/thriller/suspense writer and a 5th degree black belt in To Shin Do Ninjutsu. Her debut novel, The Ninja Daughter, will be published by Agora Books in Fall 2019. Her short stories have been published in several anthologies, and her non-fiction Empowered Living: A Guide to Physical and Emotional Protection is available as an ebook. Before writing, Tori performed on Broadway, television, and film and has traveled the country teaching seminars on ninja arts, weapons, and women's self-protection.

Tori Eldridge is a Honolulu-born mystery/thriller/suspense writer and a 5th degree black belt in To Shin Do Ninjutsu. Her debut novel, The Ninja Daughter, will be published by Agora Books in Fall 2019. Her short stories have been published in several anthologies, and her non-fiction Empowered Living: A Guide to Physical and Emotional Protection is available as an ebook. Before writing, Tori performed on Broadway, television, and film and has traveled the country teaching seminars on ninja arts, weapons, and women's self-protection.