Planes, Trains, and Peace of Mind

So, there we were, sitting on the tarmac in St. Louis biding our time. Actually, the pilot had taxied our plane away from the gate to avoid the mandatory evacuation that is required after an hour or so of just sitting in a non-ventilated cabin, enjoying the slow ripening of 150 humans. He would chime in periodically to inform us of the status of the thunderstorms that had temporarily shut down La Guardia airport—apparently lightening is not a good thing. It was time for some ninja magic.

I had finished the pitch prep for my novel, so there was no work to be done in that department. So, I fired up my Kindle and marveled at the sorry bunch of citizens that resided Under The Dome. After three hours of hope and disappointment—from the pilot, not Stephen King—we headed back to the gate. Those who wanted to roam the terminal could do so but if too many of us left the plane, we’d have to begin the boarding process from scratch. Ever the optimists, my husband and I elected to remain in our seats. After another hour-plus of promising updates, we were asked to leave. La Guardia was closed for business.

We had been given a number to call or a line in which to wait to book another flight. I started dialing in the aisle—which turned out to be a wise call since the line was two dozen long by the time we exited. The reservations agent cheerfully assured me that they could get me into NYC by midnight the following night. It was 4pm. That meant another thirty hours in St. Louis which, at another time, I might have enjoyed (Gateway Arch and all that) but Tony was scheduled to receive TV/film pitches from writers at the ThrillerFest conference, in twenty-one hours! So, I went to work, spinning my web of ninja magic around the reservations agent.

“Let’s think creatively, shall we?”

Unfortunately, while we were willing to accept any amount of inconvenience, every flight on every airline had been overbooked to accommodate the cancellations. My friends in the Big Apple would be enjoying clear skies in an hour, but it made no difference for us.
Now, by this time, my other cabin-mates (pacing the terminal, and toe-tapping in line) looked as testy as a nest of Rattlesnakes. Even my easy going husband looked to be in the throes of travel hell. I, on the other hand, had started to look at the whole situation as a deliciously diverting puzzle.

I could hear her shaking her head, but she looked anyway. Good thing I had asked for Boston—DC and some others were closed, as well.

“I have a flight!” She was so excited until she realized that there were two of us. “There’s only one seat.” She sounded so crestfallen.

I eased her disappointment and assured her that all would be fine. “Just keep looking.”

She gasped. “Another one just opened up!” She couldn’t believe it.

I could. “Hey, Tony, someone just jumped off the plane.” I laughed. “Not really. It’s not liked I pushed them.” The agent laughed with me. “Or did I?”

She stopped laughing. “You’re starting to scare me a little.”
I assured her that I scared a lot of people and not to think too much about that. (These are not the droids you’re looking for.) She booked our flight which would leave in a couple of hours—instead of thirty—and I thanked her for the fun conversation and wished her well. Then I called Amtrak.

After a quick jaunt to Chicago and a change of planes, we arrived in Boston just after 1am. A short cab ride took us to Boston South Station where I had booked a 5am train to NYC. Tony napped on a bench but I was wide awake. The whole adventure seemed seamlessly perfect to me. While I was on the phone paying for the Amtrak tickets, Tony had received an email that the production company of his movie, THE EQUALIZER, was picking up the tab for our visit to Boston in a few days. Yes, that’s right. We were planning to take a train from NYC to Boston after ThrillerFest to watch Denzel Washington in action. So there we were, in Boston’s deserted South Station traveling TO New York on the same dime that we would have used in reverse. Seamless. I used the down time to investigate—I had never traveled by train—and to update my Facebook. Of course! Then the train arrived and we found ourselves in First Class. Apparently, I had lucked out (or did I?) into getting the express train at a price break. So, we enjoyed a lovely breakfast. I had planned to catch some sleep but Massachusetts and Connecticut were way too beautiful to miss. It was great! Until, the train broke.

Lightening (from the previous night’s thunderstorm) had struck a pole and a wire was down. It shorted out the electricity on the train and we were dead on the tracks. We started laughing. Passengers glanced curiously in our direction, but what could we do? This was pretty damn funny!

Within the hour, we were rescued by a regional train. They laid a plank from one train to the other and over we went. An hour later, we were finally in the Big Apple at Penn Station. The hotel was in Grand Central. At this point it was about 10am. We had been up since 4am the previous day.

The last time I had been in NYC, I was a 23yrs old dancer. I had lost none of my city weaving techniques, and my husband was hard pressed to keep up with me. We had forgotten some necessary toiletries and my city radar told me we would find what we needed up ahead. Sure enough we did. All it took after that was hailing a taxi—the first traveling step that went without incident or delay.

We checked in just in time to shower and dress, and for me to pop the crown off my tooth. Yes! The crown—off my molar—floating about my mouth. Who cares! We were there, presentable, and on time. I felt enormous satisfaction in having made that happen without a single blip in my peace of mind. Hell, it was even kind of fun.

Oh, all right—it was a lot of fun! 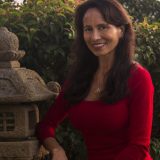 Tori Eldridge is a Honolulu-born writer, a 5th degree black belt ninja, and a former actress, dancer, singer on Broadway, television, and film. She writes action-packed, culturally-rich thrillers and mystically intriguing suspense, empowering non-fiction, and has taught ninjutsu and empowerment across the country.

Tori Eldridge is a Honolulu-born writer, a 5th degree black belt ninja, and a former actress, dancer, singer on Broadway, television, and film. She writes action-packed, culturally-rich thrillers and mystically intriguing suspense, empowering non-fiction, and has taught ninjutsu and empowerment across the country.